Pop in for your bread, milk and eggs, then stay for tapas and spritzes.

“The way locals have embraced us is awesome, but absolutely mad,” says Logan, who comes from managing Brighton’s Schoolhouse cafe. “We started with nine staff and had to increase to 24 by the next weekend.”

This very immediate local embrace suggests a growing desire for new hospitality venues in the area. A new Mexican spot, Hot Lips Hacienda, also recently opened nearby, joining The Diplomat, which since 2015 has been a local favourite, on Railway Parade.

The Deli Co. and AM:PM are two separate but connected venues that occupy the same building on Highett Road. The deli takes its inspiration from those old, perhaps idealised, local food stores where everyone knows your name. It aims to support local farmers and small producers the Highett community won’t find in the supermarket.

The grocer stocks cheese from the Calendar Cheese Company; brioche from Baked for Sofia; sourdough from Dench Bakery; milk and yoghurt from Saint David’s Dairy; Little Bertha eggs and cakes; and pork pies from Pacdon Park. Coffee at both The Deli Co. and its adjoining eatery comes from Dukes Coffee Roasters. 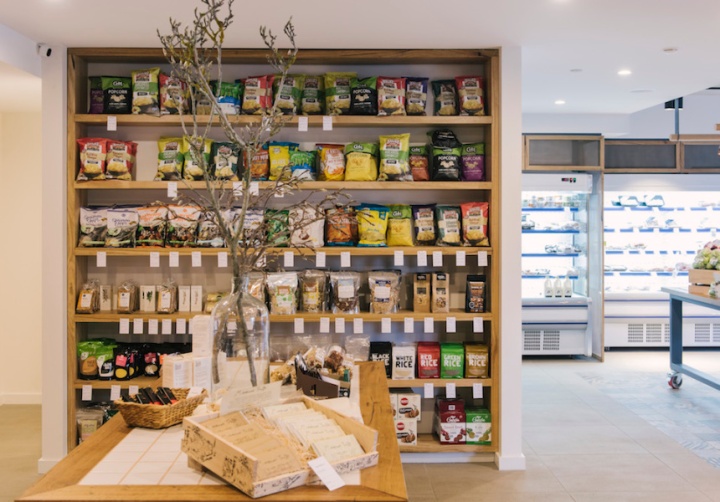 “We learnt a lot in our first week,” Logan says. “The main thing being that homemade meals are quite sought after, so we are in the process of producing those in an offsite kitchen.”

Jack Stuart heads the kitchen at AM:PM, the cafe and bar. He’s from the UK and previously worked at the Forest Side Hotel, a Michelin-starred restaurant in England’s Lake District.

His breakfast menu features dishes such as gingerbread hotcakes with grilled apples, and woodland mushrooms with fried semolina cake and pecorino. A tapas menu comes out after 4pm featuring oysters with finger lime; mushroom arancini; and charcuterie boards made up of produce sold next door.

AM:PM is also licensed, providing a new drinking hole for locals who don’t have many bar options on Highett Road. A strict selection of European and Australian wines and spirits is offered alongside classic cocktails including Negronis, Martinis and Aperol spritzes.