It’s dishes with an Asian flourish at the new cafe from the owners of Windsor’s Journeyman.

Light Years is the kind of place you can pull up a stool for a solitary working breakfast, or gather friends for a lunch date. It’s sleek and open, with stone and timber throughout. Overhead is a giant light that resembles one of Saturn’s rings, or the outline of the moon.

Hawthorn’s food landscape is not the same as Fitzroy’s or Prahran’s says Sebastian Beard, who works front of house and who was employed at Journeyman for five years. “So there’s room to grow and lead the charge when it comes to the food scene. It’s a pretty exciting spot to have opened up.”

Simon Ward, who was previously executive chef and co-owner of Fitzroy’s Hammer & Tong (which closed earlier this year), is heading up the kitchen. (He’s also signed on as executive chef at Journeyman.)

“We have tried to make the menu quite approachable to cater to the variety of people coming in – the locals, people who work in the area, and the foodies travelling from around the city,” Ward says. 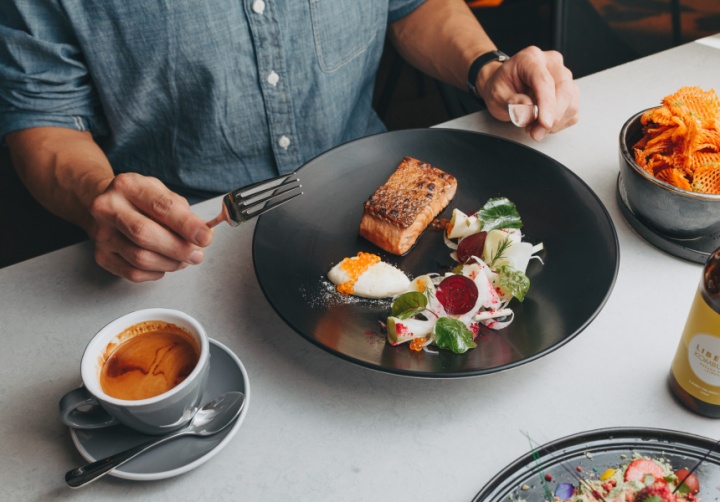 Regarding that last group, Ward’s favourite dish on the menu – miso scrambled eggs – should satisfy them. It’s the highlight for Beard, too.

“We questioned whether it was going to work for a while. It sort of looks like the bottom of the ocean,” Ward says.

Matcha waffles come with dark chocolate, lemon cheesecake and popping candy; a “pixel” avocado dish (the avo is sliced into little squares) comes with poached eggs; chilli air-dried kale; edamame hummus; and an Asian flourish of nori, lime and pickled radish. There are a significant number of vegetarian dishes including a winter bowl of Jerusalem artichoke with potato and cauliflower, and ramen topped with kohlrabi, shitake, charred spring onion and mushroom dashi – it’s one of the crowd favourites so far.

“We also love bringing a little bit of theatre to the food,” Ward says. He spent three years working at Shannon Bennett’s Vue de Monde, so he’s well-versed in the importance of presentation. “If you order the matcha waffles, the waiter will pour dark chocolate over the dish upon arrival. Same goes for the dashi that goes with the ramen.”