Come here for cold ramen, sesame ramen and a meat-free version made with no less than 20 vegetables.

An instigator of the popular Meat Free Monday campaign isn’t the most obvious candidate for a ramen bar’s namesake. But the owners of Anchor Place’s Yoku Ono wanted to tap into the region’s penchant for restaurants named after people.

“You have Miss Chu, Tokyo Tina, Mr Miyagi and Hanoi Hannah in close proximity, but we wanted a name that stood out,” says co-owner Harry Curtis. “Yoko Ono herself was (and is) pretty provocative – we knew it’s not a name people would easily forget.”

You can smell the rich broth of head chef Tomoya Kawasaki’s generations-old ramen recipe as you enter the double storey space, warmly composed of timber furniture and Japanese knick-knacks.

“We want people to walk off a Melbourne street and feel like they’ve stepped into a little Tokyo-like ramen and sake bar,” Curtis explains.

Curtis’s backstory isn’t run-of-the-mill; after his time on the 2014 series of reality cooking show My Kitchen Rules, he broke his neck in a beach accident.

“When I was recovering, I needed a project to get me through. My dad’s business partner had this space free, so I put together a business plan for a sandwich shop. He signed off on it and it quickly became my motivation to get better.”

Curtis and co-owner Billy Staughton chipped away at the fit-out, opening the sambo shop and later introducing bagels to the fold. But when a loyal Reuben-ordering customer (Kawasaki) suggested the space better lent itself to a ramen bar, the team decided to take the plunge.

With Kawasaki at the helm, the sandwich store transformed into Yoku Ono. Ramen remains king here, with a soup comprising of an eight-hour long cooked chicken broth. There’s a traditional option, with chicken breast or pork belly, a spicy miso ramen, or the Tan-Tan sesame ramen with spicy pork mince. Otherwise, try the vegetarian ramen (“which is still quite popular among meat eaters”) whose broth combines 20 kinds of vegetables.

At lunchtimes, Yoku Ono buzzes with local workers, usually in to enjoy a ramen. “But it’s dinner you really want to come for,” says Curtis. “We offer a series of osozai – delicate and finely prepared Japanese tapas dishes.” You’ll find them in the form of fresh tuna sashimi carpaccio with light soy, wasabi leaves and lemon, or oyster tempura with green curry mayo.

There’s also a Japanese pork belly with yuzu apple sauce – a nod to the classically British pork and apple pairing. One of the house favourites is the Japanese mini taco, made of tuna sashimi, wasabi leaves and truffle oil. The food is best paired with sake, which has the power to enhance flavours depending on what you’re teaming it with. If you’re confused, ask the wait team.

One of Yoku Ono’s biggest drawcards is its hiyashi chuku (cold ramen), introduced over the summer to offer respite from the hot stuff.

“Think of it like a deconstructed ramen. The noodles, the sauce and the protein, whether it’s a tuna, chicken breast or tofu, come separately. The noodles, however, are soaked in the broth and left to cool, so you still get that ramen flavour.” 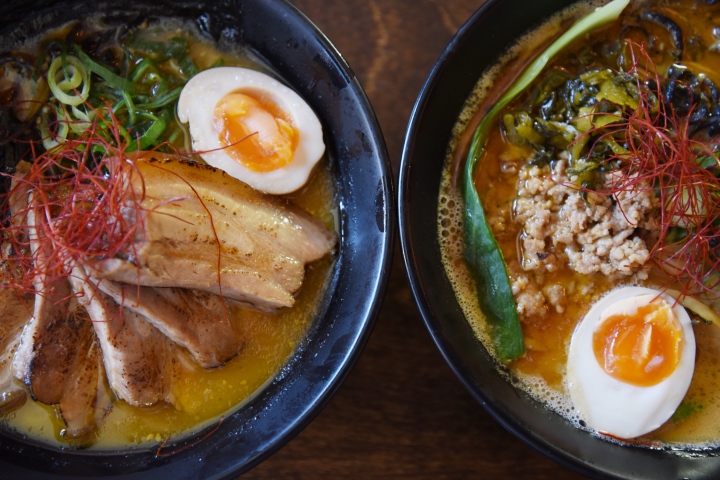