A Windsor eatery breaking away from the usual cafe schtick.

Through the dark iron gates that mark Uncommon, reckless plants hang in pots suspended from high ceilings. This café and restaurant could almost be mistaken for a florist, or a jungle.

The vegetation reiterates the philosophy behind Uncommon: to serve pure, wholesome food. The menu is as clean as the interior’s stark white walls, using unprocessed, chemical-free products. Despite this, the Windsor cafe’s fare remains affordable, a surprise considering ‘healthy’ usually equates to ‘exorbitantly expensive’ in this town.

Reading the menu can be overwhelming due to the fact that every dish has at least six ingredients in it. In a time where restaurants keep banging on about the simplicity of raw ingredients, some would think this is overdone — but Uncommon miraculously pulls it off. So even if you think a sweet potato and brown rice cake served with chorizo, smoked almonds, a 65°C degree egg, sugar snaps and kefir ricotta ($18.20) sounds utterly ridiculous, give it a shot anyway. It’s a knockout. 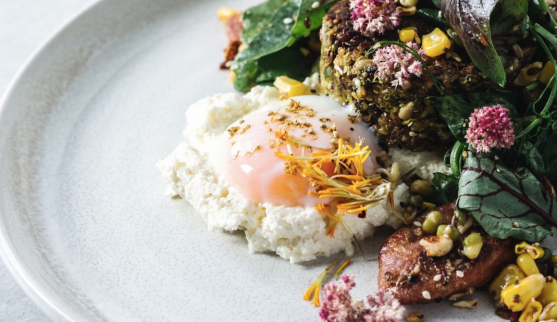 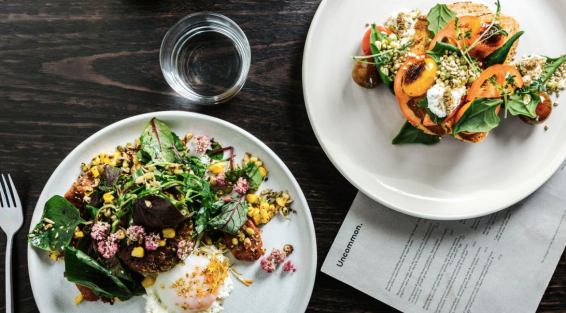 There are obvious healthy options for breakfast including the acai berry pudding ($15) and the super salad of young coconut, kale, beetroot and quinoa ($15.20). But it’s the discovery of healthy pancakes that really gets us excited; these gorgeously stacked banana and golden flaxseed pikelets come covered with fresh fruit ($16.50).

Industry Beans is behind Uncommon’s coffees, which are unconventionally served on mini metal trays. If you don’t want coffee, things are about to get even weirder in the forms of superfood golden lattes and wattleseed chais.

While the restaurant has strong brunch game, Uncommon is also open for dinner, boasting a vast menu that is set to suit all diners. A red duck curry with peaches ($30), pork belly with pear kimchi ($32), and Cloudy Bay clams ($7) are just some of the after dark dishes on offer. A mix of sustainable European and Australian wines are also available.

Uncommon makes eating wholefoods entertaining, regardless of whether you geek out over health food or try to avoid it at all costs. The establishment’s collection of quirks and efforts to steer away from conventionalism makes it a key competitor in restaurant-dominated Windsor.

One thought on “Review: Uncommon, Windsor”